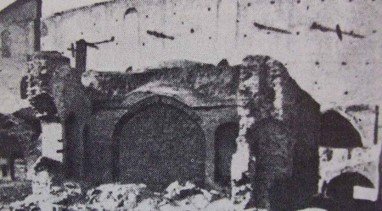 At the age of eight, ʻAbdu’l-Bahá watched His Father, Bahá’u’lláh imprisoned and suffer in the Síyáh-Chál( Black Pit ). The Báb was executed in 1850 and nearly all the leading exponents of His religion were killed by fanatical clergy and government troops. Bahá’u’lláh was spared the fate of His companions but was falsely charged, in 1852, with complicity in an attempt on the life of the Shah. He was at the village of Afchih, near Tehran, when a warrant was issued for His arrest and detention. No food or drink was given to Bahá’u’lláh for three days and nights. There was also an attempt on Bahá’u’lláh’s life. In the Síyáh-Chál, God made known to Bahá’u’lláh His great Station. Wrapped in gloom, breathing the foulest of air, His feet in stocks, and His neck weighed down by a mighty chain, Bahá’u’lláh received the first stirrings of God’s Revelation within His soul. Under these dreadful circumstances, the “Most Great Spirit” revealed itself to Him, bidding Him to arise and speak forth the Word of God.
`Abdu’l-Bahá’s family is stripped of their possessions and must live in poverty
During that time Abdu’l-Bahá, was attacked in the street of Tihrán.